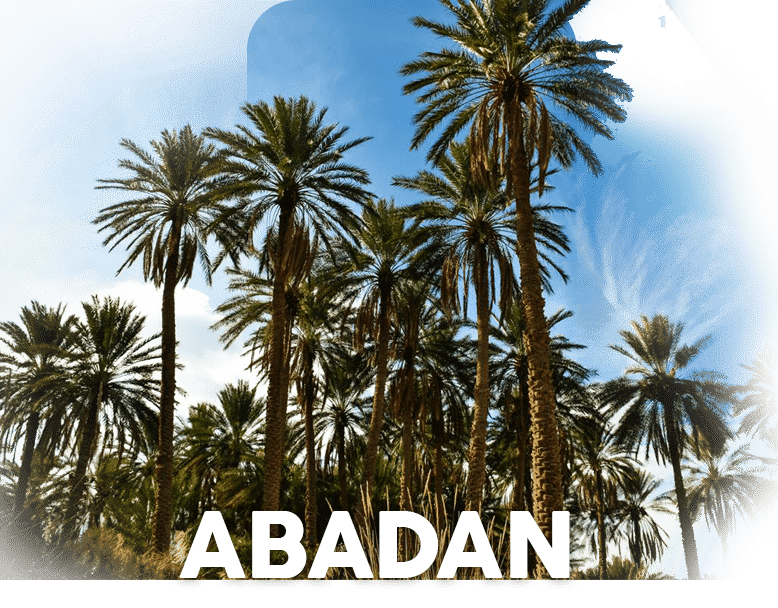 Abadan is a city in Khuzestan province and southwestern Iran, the center of Abadan city and one of the free trade zones (Arvand Free Trade-Industrial Zone) of Iran, which is located on the islands of the same name in 53 km of the Persian Gulf near the borders of Iraq and Kuwait. It also has an airport and port, and has been one of the most important cities in the Middle East and Iran since World War II due to its strategic oil and petrochemical refinery and its border with Iraq. One of the largest oil refineries in the world (Abadan Oil Refinery) is located in this city. Oil reaches this city by pipeline from most parts of Khuzestan and after refining it is exported to the whole world. The closest city to Abadan is Khorramshahr, which is about 15 km away from this city.

Among the famous neighborhoods of Abadan, we can mention Ahmadabad, Amiri, Kargar alley, Amirabad, Barim, Bavardeh (north and south), Karun, Arusia province alley, Laleh alley, Hazaraiha, Indians and Cyclin. Bahar alley, Ghods alley, Salich alley (west and east), Baharestan alley, Golestan alley, Zolfaghari alley, Mellat alley, Bahman alley, Valiasr alley, Tank Farm, Jamshidabad, Qanavati service, Hilal Barim, Niroo alley; Feyh and 700 devices, as well as Farhangian dormitory, which has been developed with the construction of Mehr housing in its vicinity, are other neighborhoods and dormitories of this city. Shadmani Island in Bahmanshir River and Arg Island in Arvandrud are also small islands in this city. In the fifties, the urban culture of Abadan, especially after the construction of the great Abadan refinery until the nationalization of oil, evoked the characteristics of a colonial city. Its neighborhoods at this time had a separate and possibly hostile population composition. The inhabitants of the central part, Ahmadabad, and the Bahmanshir neighborhood were urban dwellers and suburbs, and the Barim, Bovardeh neighborhoods were Europeans and the Iranian staff associated with them. The city of Abadan is a linear city and if you pay attention to it, the Arvand border and all organizational houses up to Khosrowabad are designed and built in this way due to the presence of water. With the outbreak of the Iran-Iraq war, the city became almost uninhabited, and after the reconstruction and return of residents, class gaps between neighborhoods narrowed, but there are still spatial inequalities between neighborhoods such as Barim, Station 7, and the Bahmanshir Bridge.

In recent years, people have used cars more than other vehicles for domestic and suburban traffic, and now the use of car rental services in Iran has become an important part of travel. If you are looking for a unique and unforgettable experience of driving a different car, if you are planning a memorable trip, if you have traveled to Iran and need a car during your stay, or if your car is not usable for any reason, you can take action during this time. Do not rent the car you need. With a large fleet of cars, the Sweech has gained a leading position in the car rental industry. The advantages of renting a car in Abadan from a sweech are very special and different, and according to international standards, it provides car rental services in Abadan from a sweech and throughout Iran.

Rent a Car in Abadan