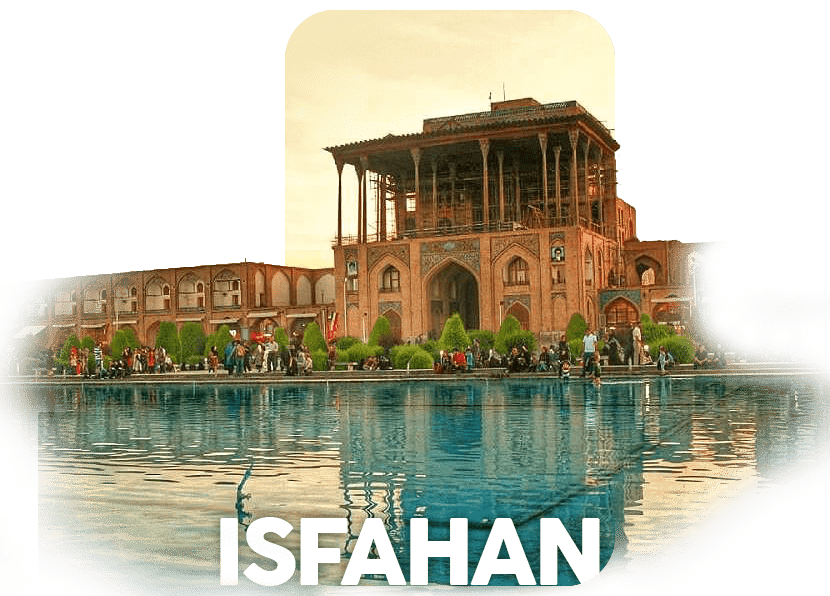 This collection is one of the most beautiful and popular attractions of Isfahan, which is registered in the UNESCO World Heritage. Historical monuments such as: Aali Qapo Palace, Sheikh Lotfollah Mosque, Imam Mosque and Qaisaria Gate, Isfahan Qaisaria Bazaar, polo gates, which has a world of art and beautiful history of Iran. After touring the role of the world It is time to visit and visit Isfahan Grand Bazaar and Qaisaria Bazaar, which can be easily visited by renting a car in Isfahan. Entering Isfahan Bazaar and drowning in the beautiful labyrinth of this bazaar is also very enjoyable. Under the dome and arches of the bazaar, it is full of carpet booths, spice shops, clothing shops and so on. This spectacular bazaar was built in the 11th century and leads to the Grand Mosque of this city. These are the sights of Isfahan that you must visit. The Forty Pillars Palace is located west of Naghsh Jahan Square. This place of interest is one of the royal palaces that was established by Shah Abbas II during the Safavid period. Another place of interest that should not be forgotten is the 33rd Bridge in Isfahan. Sousse Pol can be introduced as one of the most beautiful sights of Isfahan at night, which dazzles the eyes of every viewer and tourist. This historical monument is one of the most original tourist attractions of Isfahan, which dates back to the reign of Shah Abbas Safavid.

In recent years, people have used cars more than other vehicles for domestic and suburban traffic, and now the use of car rental services in Iran has become an important part of travel. If you are looking for a unique and unforgettable experience of driving a different car, If you are planning a memorable trip, if you have traveled to Isfahan and need to rent a car in Isfahan during your stay, or if your car could not be used for any reason, during this time you can rent a car in Isfahan. With a large fleet of cars, it has gained a leading position in the car rental industry.

Rent a car without a driver in Isfahan

If you are planning to travel to Isfahan or you need a cheap car to do your daily work, renting a car from Iran Sweech is the best choice for you. Also, in addition to car rental services without a driver in Isfahan, you will be accompanied by additional services such as car rental with a driver and transfer. Take delivery and then refund at any other station across the country.

Sweech in Isfahan gives you the privilege to receive your car in the shortest time and without worrying about traffic restrictions and travel to any part of Isfahan or the country, as well as all cars with basic insurance coverage for free and daily allowable distance 300 km is available to customers in all car classes. The required documents for renting a car in Isfahan and other cities are equal to each other, and with just one call you can find the price of renting a car without a driver, renting a car with a driver and car rental conditions in Isfahan Get informed. The sweech has two stations in Isfahan. You can rent your car from the sweech station of Isfahan city center, the sweech station of Isfahan International Airport. Car rental services in this city are provided in the form of car rental with driver and without driver. Sweech cars are offered in this station from economy class to luxury and you can choose your car according to your needs. Price list of rental cars based on car model, number of rental days with driver and without driver.