Kish is a small island in the heart of the Persian Gulf that has quiet corners for those who want to relax and enjoy the view of sunrise and sunset, walking, cycling, ecotourism. The beauties and sights of Kish have made This island has the title of the pearl of the Persian Gulf. Kish Island is one of the most important and attractive tourist destinations in Iran, which has many places of interest with its small area. If you are planning to travel to Kish, it is good to plan to visit Kish attractions by renting a car from Iran Sweech before starting the trip. Renting a car in Kish with luxury cars and sightseeing in this coral island is an indescribable and extraordinary experience. Will remember to drive.

There is a car rental process in other cities of Iran, but the car rental process in Kish is free due to the fact that the area is free and the import of luxury, foreign and American cars is free, and also the cost of a taxi to visit several recreational places in one day. Most travelers want to rent a car in Kish. Also, one of the pleasures of Kish Island is driving in this beautiful island. One of the tourist attractions of Kish Island that are worth seeing is water recreation. If you are interested in water recreation, in Kish you can access a variety of options, from parasailing and diving to surfing and jet skiing. But if you are not interested in such excitement, at least the pleasure of boating Do not hesitate to watch the coral and colorful underwater world with glass-bottomed boats! Another entertainment on the island is the Kish cycling route, which is one of the longest and most scenic cycling routes in our country. The route of this track is about It is 75 km that you can safely continue your cycling on this track and take artistic photos of the azure waters of the Persian Gulf. Greek ship is one of the most beautiful places in Kish. In 1345, it sank on the southwestern coast of Kish. The ship was built in Britain and has had various owners throughout its life, but its last owner was a Greek. Many attempts were made to save the ship, but none of them succeeded, and the ship was eventually abandoned. This huge ship, especially at sunset, has a beautiful view for photography and is one of the sights of Kish and many tourists to see it. They come to this point of the island. After introducing these attractions, it is time to visit the beautiful underground city of Kariz, which can be visited easily and without worries by renting a car in Kish. Kariz is one of the sights of Kish, which is an example. It is one of the old aqueducts that is 2500 years old. You can walk in these underground tunnels and see how the aqueduct system works up close. The length of these tunnels reaches more than 8 km, so when you walk in this tunnel, it is as if you are in an underground city. In this ancient structure, handicraft booths and a traditional tea house have been set up to attract tourists.

Rent a car in Kish

The sweech has a station in Kish. You can rent a car from Kish Airport sweech Station.

Car rental services in Kish are provided in the form of car rental and electric motors.

sweech cars are offered in this station from economy class to luxury and you can choose your car according to your needs.

Price list of rental cars Depending on the car model, the number of rental days varies.

Iran Car Rental Sweech is the official representative of Europcar Iran since 2011 in the field of car rental with driver and car rental without driver. The sweech has started operating with more than 15 stations in 11 cities and all international airports in Iran. In addition to Iran, this group offers its services all over the world without the need for a credit card. 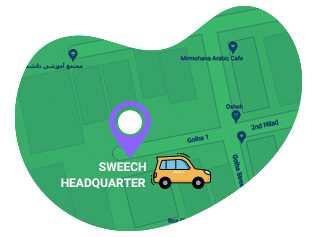